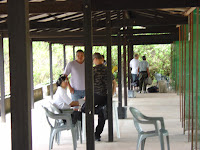 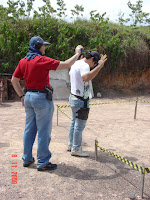 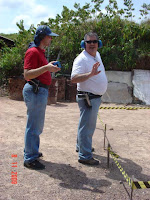 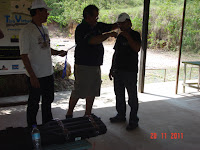 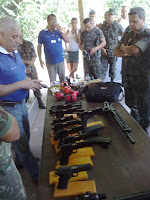 What do you buy the tactical nut who has everything? The answer is: A steel framed, bone charcoal case colored Doug Turnbull AR-15 called the TAR-15. It costs $2,750 with a plain American Black Walnut stock, and you’ll have to get in line if you want to buy one, because they are selling like hotcakes and backordered 5 months. Wait a minute, you ask? Wooden stock? Steel? AR-15? Something doesn’t add up here. But no, your eyes are not deceiving you. The king of firearm restoration, Doug Turnbull, has been making his own firearms for years, and his newest projects are on the AR platform, in .308, .223, and even 7.62×39 and .300 Blackout. We were able to test the .223 version of the gun, just to see if it actually works, and not surprisingly, the TAR-15 is as functional as it is beautiful. Steel and wood will never take the place of aluminum and plastic in the AR-15 world, but if you want a genuinely unique gun, no two of these will ever look the same, and the price is very reasonable for something that only a handful of people will ever own.(Click Here to Read More)

Convertible guns have never been that popular in the US. Putting the top up and down is such a pain, and… just kidding. This type of convertible gun allows you to change calibers, shooting two or more types of ammo through the same gun. Europeans, and especially European hunters have always loved convertible guns, but they never really caught on here for some reason. It could be our obsession with rifle accuracy. Even though the average hunter can’t shoot within two minutes of basketball (according to famed hunter writer Ross Seyfried), Americans really love the idea of an accurate firearm, one that can, if shot by the right person with the right rest, shoot into the width of a quarter or less at 100 yards, or 1 MOA, for “Minute of Angle.” That was the challenge when CZ-USA decided to introduce a rimfire combo gun to the US market. It is called the Model 455 American Combo, and the retail prices start just north of $400. In the box, the gun comes with both .22LR and .17HMR barrels, and changing them out takes only two Allen wrenches, included with the gun. We shot our pictures of the test gun in the field, so you can see how easy it swaps, and the accuracy on both barrels is closer to 1/2MOA than 1MOA. The CZ 455 comes in a polymer stock configuration, a competition stock, even a Mannlicher style stock with hi-lux wood, in addition to the basic Walnut you see here. If you have longed for an old world style bolt rimfire, this CZ 455 offers you both the classic look and feel of the 50s and 60s, with the ability to convert from a .22LR plinker to a .17HMR hunting rifle, and you can get a .22WMR barrel as well. ( Click Here to Read More )

One of the bi-products of the artificial gun shortage we just experienced is that a lot of guns that otherwise wouldn’t have made it to dealer shelves not only made it, but sold out. One of those was a new line of shotguns from an old brand called Webley & Scott. Don’t be fooled. This is a purchased name that is being put on guns that are made by modern manufacturers in Turkey and Italy. The old Webley & Scott, originally from Birmingham, England, is long dead and buried, and with them went their production of some of the finest shotguns and rifles in history. Still, these new guns coming out under the W&S name are very interesting. We haven’t gotten a look at the Italian SxS and O/U guns, but in the home defense realm, they have a new “slingshot action” that is somewhat unique. It isn’t a true pump and it isn’t a true autoloader, but rather something in between. We bought one, just to see if it works, and to see if this type of action could be the next revolution in home defense shotguns. The street price is around $300 for our tested model, and for the most part it worked great. The slingshot action is something that you would have to get used to, but for a new fangled gimmick, at least it mostly works. The only problem is that new shooters might see the Webley & Scott moniker and buy this gun thinking that it is tried and true design from a trusted name. It isn’t, and they aren’t. The original Webley & Scott engineers are most likely wretching in their graves knowing that someone is pawning off Turkish junk under the auspices of their good names, but the guns do work, and they are inexpensive. (Click Here to Read More)

Seconds that Can Save Your Life

There is only one type of shooting competition that only has a trophy for second place. The trophy is generally made of granite, has an epitaph inscribed on it, and when it is awarded to you, you are surrounded by everyone you love, crying their eyes out because you are dead. It’s called a tombstone. A gunfight is a competition, but it isn’t a standard shooting competition like those you see in timed shooting sports. Speed is a factor, but it isn’t the only factor. And there will always be factors outside of your control, such as the physical and mental state of the threatening party, his competence, how well we shoot under the pressure of a gunfight, and what we are doing while engaging our adversary to keep from getting shot (or cut, or bludgeoned, etc.). Some things, however, you can control, or at least prepare to control, and many of these involve speed and can be practiced. They are how fast you are able to present your weapon, how fast you can fire it accurately, and how fast you can reload when you are out of bullets or in danger of soon being out of bullets. Wyatt Earp, one of the most famous gunfighters of all time, is quoted as saying: “Take your time…but be quick about it! He is also quoted as saying something to the effect of “Fast is fine but accuracy is final”. The interplay between these two factors, speed and accuracy, is one reality we must always recognize, the faster you go the less accurate you are. (Click Here to Read More)